The Foundation has supported wine grape variety clonal evaluation trials throughout California. These trials have provided the necessary information to characterize the vine development, productivity and fruit quality differences among clones of the major wine grape cultivars, providing grape growers and vintners sound data on which to base their planting decisions.

The Foundation funded initial research needed to establish the role of fungi in young vine decline – now known as Petri Disease. This funding helped scientists characterize the causes of Petri Disease, as well as develop disease and management practices to reduce the occurrence of the disease.

The Foundation has funded the development of screening techniques for the evaluation of magnesium tolerance in grape species and rootstocks. This work will allow the breeding and commercialization of rootstocks that can be grown in the high magnesium soils found in many areas of the North Coast growing region.

The Foundation has supported fundamental work examining the genetic and taxonomic relationships among grape species, as well as how natural hybridization influences these relationships.

The Foundation has funded research to better understand the number and nature of the genes involved with phylloxera and nematode resistance, as well as work to develop genetic maps and molecular markers associated with these traits.

The Foundation has provided funding to examine phytophthora resistance in grape species and rootstocks, as well as to study the relationship of soil fungi on phylloxera root damage.

The Foundation has supported work to examine the effects of rootstocks on the fruit maturation rate of early table and raisin grape varieties. 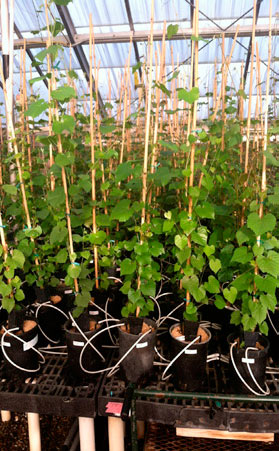